Bengal has witnessed lots of developments of late – a historic transition of power, fast deterioration of Left power supplanted by the meteoric rise of rightwing politics, headed by Trinamool Congress. But Hindus are left in the lurch still and it seems with each day it passes, Hindus are getting more vulnerable to most raging attacks of their adversaries, in particular Islamic fundamentalists. If not, how can incidents of severing heads of Hindu deities be on the rise? What has happened in village Moukhali, P.S. Mograhat, Dist.: 24 Paraganas (South) is just the same. Heads of large deities of Shani Dev and Kali Mata in the local temple were found severed on 27.09.11 night.

Moukhali, not far from Kolkata, remains at strange situation. While the village is dominated by Hindus and shares a good relation with adjoining Hindu areas, it is at loggerheads with the Muslim villages on its eastern side. Muslims do share the same thoroughfare but antagonism between the two communities refuses to end. Prior to the said incident thefts in local temples had taken place and several Muslim neighbors were taken into custody in this regard. So, in this time too Hindus of Moukhali smell a rat.

It’s worthwhile to mention that heads of two other small deities have also been severed. But while these two are still prominent in the temple, police was quick enough to immerse the larger deities of Shani Dev and Kali Mata to the nearby pond.

Police is trying to paint the entire incident in the color of intra-village feud to maintain harmony but villagers are terming this as a work of Muslim felons steadfastly. Past experiences prove that their assertions hold water.

Tension prevails in the village. 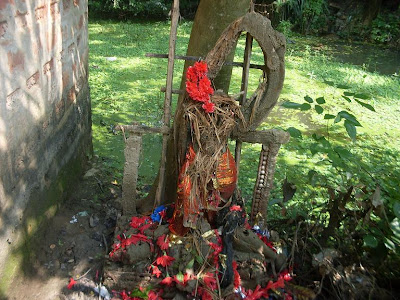 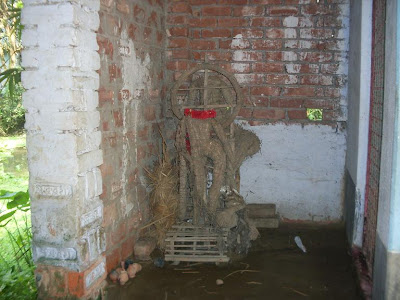 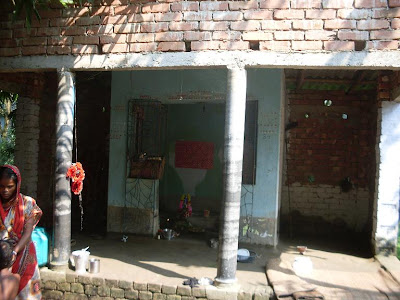