Complete Hell for Hindus in Jalaberia

Bengal, in particular Hindus inhabiting it, have indeed got a “Poriborton” but not the coveted change as owing to the change of guard in the state Hindus have become the one and only casualty and with each day it passes, their position is getting perilous. Not the Hindus here are being snubbed only but their views and even legitimate protests are both being abused and subdued whenever necessary also. The murder of Rohul Kuddus, Moulavi on February 18, 2013 while returning from Jaamtala Haat, P.S. Kultali by gunmen (unidentified yet), has led to a series of Hindu persecutions in the vicinity and the silence of police and administration; their bids to smash Hindus also have added fuel to the fire.

Jalaberia, located under the jurisdiction of P.S. Kultali, District: 24 Paraganas (South) has been the worst affected area. Hindus here are bearing the brunt of joint attacks of Muslim radicals and administration.

The Islamic fury against Hindus, following the murder, was witnessed first on February 19, 2013 at 10 am when 60 Hindu women from Jalaberia (in 6 automatic vans) were going to Narugopal temple at Tulsighata to fulfill a solemn promise made to the Holy Deity there earlier. But they were prevented at Kaltala by Muslim youths; radicals, instead of letting those innocent women go, attacked the six vehicles, sexually harassed Hindu women and even tried to kidnap a Hindu youth (age 25) accompanying women in the journey. However, persistent requests of Hindu women saved him and they returned to Jalaberia without more ado, let alone performing Puja.

On February 20, next day, in the morning, 16 Hindus, laborers in brick-fields, were abducted by Islamists in the same area of Kaltala to teach Hindus another lesson. Hindus, furious as a result, blocked the main road in Jalaberia. Even if it was a protest against the audacity of Muslims and incompetence of police to contain this cancer on the body of democracy, the protest was a peaceful civil obedience virtually. Two Muslims were also taken as hostage.

Police, meanwhile, geared up to recover 2 Muslims and started pressurizing Hindus who remained resolute in their demand – 2 Muslims would be freed in return for the release of 16 Hindus at Kaltala only. Without heeding their demand, a large contingent of RAF along with C.I. of P.S. Joynagar recovered 2 Muslims leading to a complete disorder and a violent conflict between Hindus and police. Police force was beaten hollow and to avoid more dangers, it was perceived to fire five rounds of tear gas.

Later, with a desire to even the score, police entered each and every Hindu household; lathi charged Hindus there and also to retain a reign of terror, closed the local market of Hindus forcibly for five days at a stretch.
The market has been opened already but only after local Hindu Samhati activists along with lawyer interfered and held a meeting with SDPO and O.C. of P.S. Kultali.

16 Hindu laborers were released by Muslim radicals, complacent with the police action, on February 21.
Posted by Unknown at 5:22 AM 1 comment:


How many days may pass memories of warriors, martyrs who sacrifice their lives for bettering the nation do not fade out. It was the year 2001, 12 years ago, when 4 valiant RSS swayamsevaks were shot dead by Muslim culprits at the house of Anwar Mollah, inhabiting the village of Sonakhali. The incident took place in broad daylight and not shocked Hindus only but stimulated them to start a decisive battle against Muslim radicals also. Hindu outlook became so vicious that administration and Muslims failed completely to tame Hindus; Muslim radicals had no other way except to flee No. 3 Sonakhali village.

The situation remains the same. In a state where Islamists are pampered and Hindus bashed day in day out those Muslim houses do remain abandoned. Muslims contemplate to return to the village every time but it remains a dream to be fulfilled yet. So, Muslims, there, are selling their lands – both residential and farm.

To commemorate valiant martyrs Hindu Samhati observed Sonakhali Martyr’s Day on February 10, 2013 with full might in the village No. 3 Sonakhali. Prior to the meeting, a blood donation camp took place with Health Point where 80 persons, cutting across gender lines, donated blood.

Later, the rally was addressed by Bikarna Naskar, Adv. Somraj Ganguly and Tapan Ghosh, President Hindu Samhati. The meeting was presided over by Nityananda Naskar. Reputed medical practitioner and owner of Ramkrishna Charitable Hospital, Dr. B. Bhattacharya was also attended the program.

Ranjan Sapui, resident of Tetultala village (in the vicinity) and also member of a Hindu family tortured by Muslim radicals outright, was invited to the dais in meeting and Rs.2,000 was handed over to him.

It is worthwhile to mention, a small temple has been built there in the memory of 4 Hindu youth martyrs. 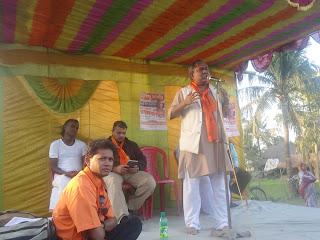 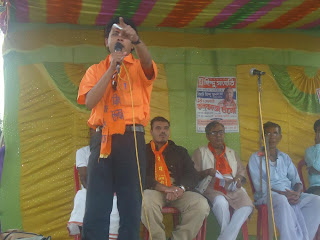 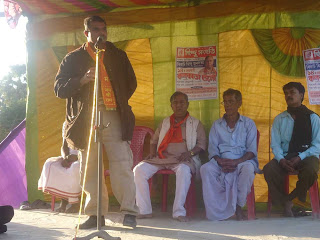 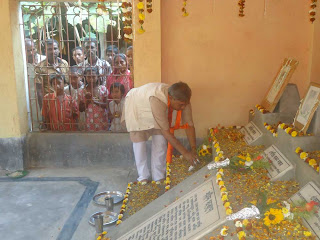 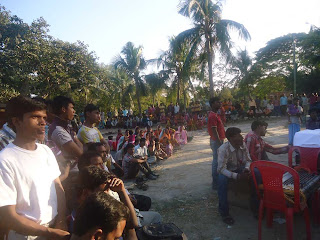 Posted by Unknown at 6:44 AM No comments:

Has Namita been victimized for being a Hindu girl?

As reported earlier, the whole situation took a turn after some vital information, which were kept in hiding from us, became unearthed. The girl, Namita (name changed), used to have an affair with the boy, Biswajit. They were so intimate that they might have physical relation as well. Namita’s mother works as a maid servant in Jadavpur area in Kolkata, leaves home at around 5 am and returns home not before 9 pm. Her father happens to be a van rikshaw puller.

On the day, they might have made love in a deserted place. There is a probability that those M boys either had seen them while making love or pretended so after following them. At first, there were 2 M boys, later they called another 2 M boys over phone. 4 M boys heavily beaten Biswajit and then raped Namita. The case would have been dumped like other cases as well unless HS workers took the initiative to follow up the case. The local Joynagar police behaved properly, but the case took a turn when Biswajit, Namita and her mother were brought to the office of SP, South 24 Parganas for enquiry. District police was desperate to suppress the news of rape as it would sparkle a new controversy and considering the overall scenario and media attention that could tarnish the image of both police and the administration led by Mamata.

In the name of enquiry they threatened Biswajit and Namita with grave consequences. They even beaten Biswajit to withdraw their complain. Namita somehow resisted the interrogation but Biswajit totally broke down. He confessed their intimate relationship and also helped police to recover a condom from the deserted place which could have easily been traced for being used by him following DNA test.

Police grabbed this story with two hands and started blackmailing them. In the mean time, SUCI, a political party and Joynagar used to be its stronghold, emerged in the scene. They, in collusion with police, put huge pressure on the victims to withdraw their complain. Yesterday evening, they forced Namita and Biswajit to get married. Now the victim’s family and Biswajit are not co operating us.

Socially backward people living from hand to mouth could not survive the pressure and finally succumbed to it without asking how come a sexual relation done with mutual consent can be compared with a heinous crime as rape?

Posted by Unknown at 6:18 AM No comments:

Barasat is back in news once more and certainly for wrong reasons; the entire area has turned into a danger zone for Hindu women virtually and due to the perennial reluctance of local administration, Muslim hooligans and their accomplices are reigning there supremely. The situation is such that Hindu women can be abducted, molested and even raped at any moment.

On February 1, 2013, at 1 pm, a Hindu girl school student of Class XI was returning from private tuition riding a bicycle while her elder brother, wary enough due to recent horrendous developments – rising sexual assaults on Hindu women in Barasat – was waiting at the crossing (Sonatikarir Mor) close to residence. As soon as the elder brother met his sister and started walking to their house, a motorbike stopped them. Two drunk youths (later identified as Mohammed Zafarullah – age 18 – inhabiting Shandalia and Meher Ali alias Mejo Khokon – age 30) were riding the vehicle who started hurling slang on the Hindu girl explicitly soon.

When the elder brother protested, the two Muslim ruffians literally pounced on him. He was thrashed severely and to save him at any cost all of his families rushed to the spot. Zafarullah and Meher Ali informed their Muslim accomplices also; four of them came in two bikes. Hindus were overpowered by criminals soon; they were thrown to the paved road and were beaten hollow. Father of the Hindu daughter, a renowned homeopathy doctor in the neighborhood, was also wounded; his head was pounded. He is admitted in the in a critical condition at the moment.

Both the Muslim ruffians have been arrested while police remains busy to find other culprits out.

The incident has not shocked Barasat only sending shudder through spines of Hindus but has rocked political and administrative circles in Kolkata, seat of regional power, also. It has also been learnt that a large number of people, all Hindus, are getting more and more worried while mulling over Barasat and its imminent future if remain unchecked.

It is worthwhile to mention, on September 3, 2012, a Hindu aged person was manhandled and also thrashed in public for daring to protest against illicit liquor trade in the area. It took place at village: Purba Ichapur of Kadambagachi, at 4 kms away from Kachkal, the place where the Hindu girl student victim was coming from.

Once a Hindu festival is performed at any institution in contemporary it must be countered with doing a Muslim festival there – however insignificant it is – and all measures ranging from pressurizing to intimidating concerned authority with dire consequences, if there is any failure to perform, reign highly. Akuni Biji Beharilal Institution, adjoining Gaopalpur Bazar, close to Moshat in District: , remains witness to such a horrendous development.

ISKCON, being invited by local Hindus, conducted a two-day camp at Akuni Biji Beharilal Institution on January 25 and 26. The event proved to be a great success, witnessed a large Hindu gathering and on January 26, a chariot (Ratha Yatra) of Lord Sri Krishna was also brought out in public. No less than 700 Hindus participated in the campaign on foot that went around the entire area.

Such a spontaneous success turned out to be agonizing for Muslim radicals in the vicinity. To prove their own dominance and also outshine the Hindu success, they planned to celebrate Milad un-Nabi, marking Mohammad's birthday, in a grand manner on January 29. With this end in view, Muslims approached Akuni Biji Beharilal Institution but when the later refused, it was intimidated outright. It has been learnt, political influences also played a major role in making the institution cede to the Muslim demand.

A Hindu female teacher, Ms. Gitalekha Nandi, turned out to be vocal against such an abrupt and also nefarious development irking Muslims highly. However, she failed to get any support in the locality and was compelled to regret the same in the Muslim assembly publicly.

Hindus who were instrumental in organizing the ISKCON event preferred to remain tight-lipped over the entire incident and also vilification of a Hindu lady who dared to protest at least.
Posted by Unknown at 3:22 AM No comments: