Why is Bengal’s reigning administration inimical to Hindus in Gouranganagar?

There was a hope that fierce struggles of Hindus, residing in Gouranganagar Udvastu Colony, P.S. New Town, District: 24 Paraganas (North), against local Muslim cronies, backed by various political echelons, erupting on 07/07/11 resulting in arrests of two innocent Hindu youths (reported here earlier) would end soon confirming to a settlement program under the aegis of administration. But contrary to expectation, situation has got murkier due to abrupt arrests of innocent Hindus in the vicinity and the victim families are suffering worst.

One of the prime victims has been Bhabasindhu Mandal, deputy head of Panchayat No. 2 (Jangra – Hatiara area) and in spite of being innocent (admitted by a few police officers later secretly), he was arrested on 14/07/11 from his sister’s residence in Malangapara, Swarupnagar, P.S. Swarupnagar. The role of police, in this case, was shocking as the contingent was witnessed to use abusive languages and make lewd gestures to women. To make the operation a success, three policemen from P.S. New Town, 1 police person from P.S. Swarupnagar, (all were in plain clothes) and two other persons from environs of Gouranganagar, identified as Bapan Ghosh and another one from Jabardakhal, were present.

The team, on 14/07/11 at 7.00 pm, just broke in his sister’s residence, dragged Bhabasindhu out and thrashed him mercilessly. Bapan Ghosh and his aforesaid accomplice warned the entire household unless Bhabasindhu’s cell phone was forked out to them, family members would face dire consequences. Milan Mandal, husband of Bhabasindhu Mandal’s sister, was later forced to sign a document, allegedly stating Bhabasindhu was arrested from his house. The document was written in English language and is yet to comprehend this language. He, as a result, and also coerced by police personnel’s presence, signed the document without knowing its content.

Well, Bhabasindhu is not alone; apart from him, 4 others including Arup Mandal, Gobordhan Mandal, Dipankar Mandal, Amit Mandal have been arrested. FIR registered by police against them – 245 dtd. 09/07/11 and sections imposed included 243/239/325/427/34.

While talking to this scribe, residents of the colony termed every arrest was based on flimsy grounds and was done owing to administrative pressures. Furthermore, as stated by them, Nag Babu, notorious policeman of P.S. New Town, also liable for terrorizing and arresting innocent Hindus, has been transferred all of a sudden. They’re certain that this is a ploy to shroud Nag Babu’s heinous role in torturing Hindus following the turmoil on July 07, 2011.

It is worthwhile to mention that Bhabasindhu, after being arrested, was not handovered to P.S. New Town promptly. Hindu rage and its mounting resistance compelled police to take him to P.S. East Bidhannagar in . All 5 accused were presented to the court later on; they are in Central Jail, Dumdum at the moment.

An FIR (44/54 dtd. 09/07/11) by Hindus from Jangra – Hatiara area was lodged to P.S. New Town against Bikash Goldar and Ganesh Seal (Hindu refugees from originally but are now hobnobbing with Islamic miscreants to torture Hindus). Fearing their own securities, due to fiery Hindu resistance in the environs, both have surrendered to police and are also in Central Jail, Dumdum these days.

Meticulous investigation of this scribe has also revealed another horrific torture on Hindus, especially the Mandal family. Two Hindu youths of the family – Sukumar Mandal & Sunil Mandal – naive and lacking any connection to the syndicate, were arrested at 1 am on July 08. In accordance with Banalata Mandal and Sarmistha Mandal, wife of Sunil Mandal and Sukumar Mandal, respectively, a group containing 10 policemen from P.S. New Town tried to barge in the residence and break the collapsible gate at dead night.

When Sarmistha, already scared, came to front, she was ordered to open the gate. As soon as it was opened, policemen gate-crashed, molested Sarmistha, Banalata and others, tore their blouses, grabbed Sukumar and Sunil, thrashed them horrifically, took them to the police van and then to the police station. No woman police person was in the group.

Don’t these facts ascertain reigning administration is inimical to Hindus? 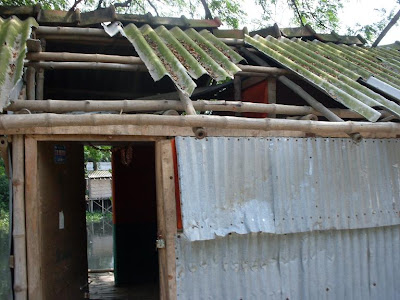 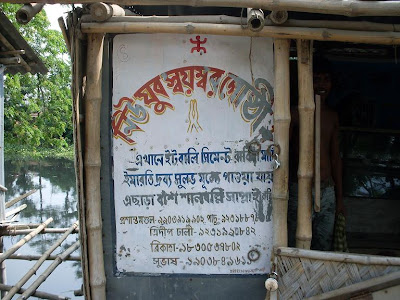 (Board depicting Office of Local Syndicate) 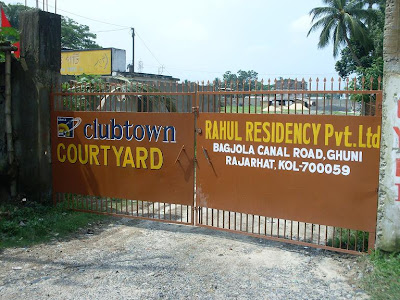 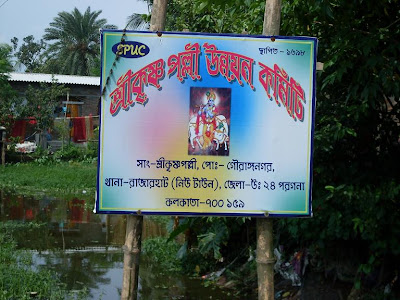 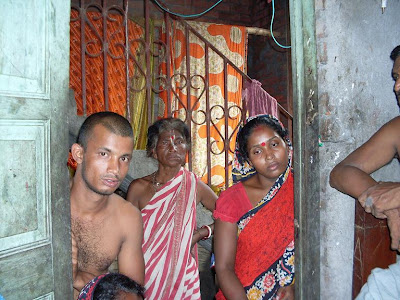 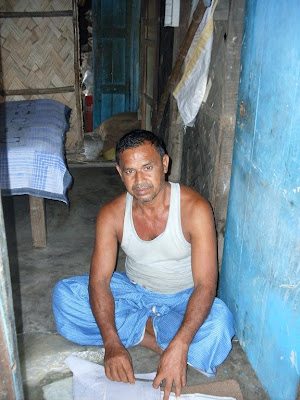 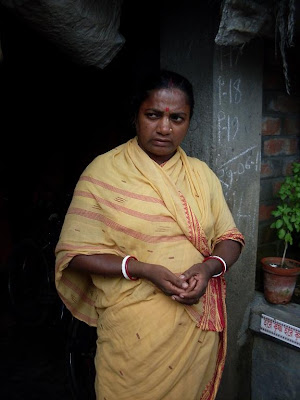 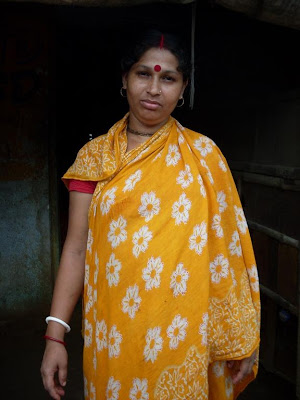 (Banalata Mandal - another woman victim of Police carnage)
Posted by Unknown at 12:19 PM