Endeavor of reigning Awami League-led Government in Bangladesh to retain “Bismillah ir-Rahman ir-Rahim” and Islam as State Religion through fresh amendment of Constitution, squashing hopes of secularists and Hindu minorities there of apposite restoration of Secular Constitution of 1972, and its feeble exculpation that some ‘realities’ forced it to do so leading to strong dissents there has touched the shores of Kolkata too and depiction of the same was witnessed in the press conference held under aegis of CAAMB (Campaign Against Atrocities on Minorities in Bangladesh), Kolkata-based human rights organization well-known for its struggles against minority persecution in Bangladesh, on 08/07/11.

Active presence of lots of Hindu Samhati members in the conference intensified success.

It can certainly be said that this approach of Awami League Government has not only delighted and strengthened Islamic fundamentalists in Bangladesh but has terrified minority groups– on the way to oblivion, once more also.

Speaking in the meeting Sri Ratneswar Sarkar stated apparently how the two-nation theory, propounded by MA Jinnah and Muslim League during the last days of British Empire, led to atrocities, anguishes and State-sponsored Hindu persecution in East Pakistan (now Bangladesh). He also congratulated organizers of the conference to be vocal against the latest nefarious design of amending the Constitution in Bangladesh, stimulating hard-liners there only, and put forward that Bangladesh must forsake this novel bid once and for all.

Sri Bimal Pramanik, at the inception of his speaking, made it clear that Sheikh Hasina, reigning Prime Minister of Bangladesh, had no role in the Liberation War of Bangladesh. As per him, despite making glorious sacrifices for the cause of Bangladesh, including in its war of Liberation from Pakistan, Hindus have virtually no position in the nation. He also stated that amendments of constitution and of Enemy Property Act on the anvil were flag bearers of worst.

Dr. Ratan Khasnabis stated without reservation that Bangladesh had gone through a Pakistan-like situation for decades. In accordance with him, no nation can develop if not it admits all of its citizens devoid of discrimination. He also made it clear if Bangladesh degenerates more, a substantial portion of its citizens will lose faith on the nation. As per him, apart from Hindus and other minority groups, secular Muslims will be the greatest sufferers, and if the fresh amendment continues, Bangladesh will lose its legitimacy yet again.

Sri Kalikrishna Guha made it clear once all these rot sets in anywhere like Bangladesh, ill-fortune remains the one and only companion. He requested the Bangladeshi Government to rectify its stand once more and save the country from the impending doomsday, its settled effect.

Sri Subir Bhowmik citing his experiences in recent Sector Commanders’ Conference where it was reiterated time and again that Bangladesh, without any secular outlook, had no future, stated that the amendment was not a mistake but felo-de-se or self-annihilation. On the word him, even after lots of years, Awami League can’t win the election on its own. It can only if Bangladeshis opt for the party en masse. Speaking on the creation of Bangladesh, he posited with conviction had there been no Agartala Conspiracy Case 1968, Shiekh Mujibur Rahman wouldn’t have become BangaBandhu and also that despite being an ardent secular, Shiekh Hasina remains surrounded by a coterie of pro-Pakistan officials.

He was also found to stick a knife into Indian foreign policy for decades and recounted how it has miserably failed to differentiate between its friends and foes.

As indicated by him, India’s execrable offense in foreign policy scenario took place in 2001, period witnessing worst religious persecutions on Hindus in Bangladesh, when Brajesh Mishra, then National Security Advisor and Principal Secretary to Indian Prime Minister, A.B. Vajpayee, being the first foreign dignitary went to Bangladesh to congratulate Begum Khaleda Zia on her landslide in nation-wide election. It is alleged, BNP, political party of Begum Khaleda Zia, in tandem with Muslim hardliners, was accountable to inflict worst torturing on Hindus then.

Dr. Sabyasachi Ghosh Dastidar, through this brief speech, brought forth a new view; terming each and every development towards hard-line Islam in earlier East Pakistan and present Bangladesh as ominous to Hindus. He also made it clear that Bangladesh War of 1971 was a brilliant maneuver of Pakistani leadership to racially exterminate Hindus. According to him, an assortment of facts and figures authenticate outright that more than 90% of martyrs in War of 1971 were Hindus. 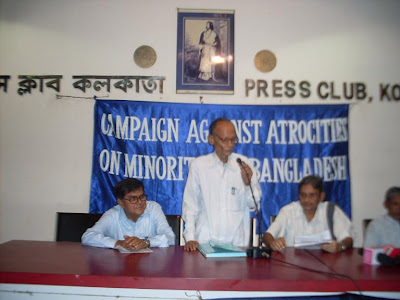 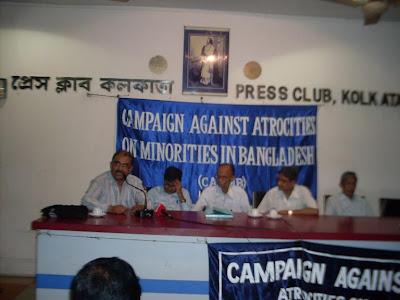 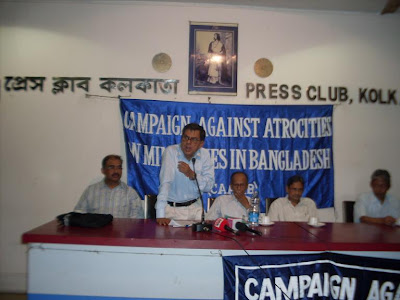 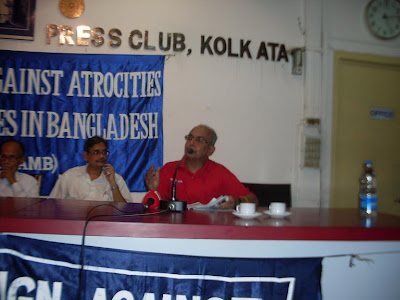