Ouster of 34-year old (odd too) Left Front ministry in 2011 by a single woman named Ms. Mamata Banerjee, TMC (Trinamool Congress) supremo, has been a historic moment for the Indian state of and it is needless to say that state populace expects a lot from her. Now the question remains – would it be possible for her to deliver ever. Many may term the ongoing events as part of honeymoon but Mamata’s rising interest in Muslim affairs is making people skeptical.

It has come to the knowledge that the Bengal CM is taking special interests in Islamic affairs and is leaving no stone unturned to rectify legal predicaments regarding Waqf properties. Well, there are justifications as well. TMC party sources state that success, in this context, would better Muslims in the state. The revenues gathered will be distributed for the socio-economic welfare of the Muslim community.

hatever may be the motive, the endeavor has kindled Bengal Muslims en masse. One of them is notable historian Khajim Ahmed and as per him, Bengal CM has looked for authentic statistics on the matter since Waqf properties worth above Rs 70,000 cr in . This is also the highest anywhere in . Mr. Ahmed hopes that success would enliven Muslims in the state.

Let’s share a few more facts as well. In accordance with Mr. Ahmed, Bengal consists of 184,000 Waqf properties and this is no less than 30.25% of such properties across . He has also accused that fraudulent managers of Waqf properties aided by officials of erstwhile Ministry of Land and Land Reforms have sold lots of these. Earlier Left Front did not heed to all these ever, if Mr. Ahmed is to be believed. What is more, CPM-led Left Front changed a 50,000 sq m property in worth Rs 20 cr into a state bus depot and warehouse.

Again, at several places, according to commoners, several key Waqf plots and properties have changed character due to legal ambiguities. This has deprived Muslims a religious bequest under Islamic law, stating income is preordained for generous purposes only.

Justice Rajinder Sachar, noted for penning controversial Sachar Committee Report highlighting mounting Muslim woes in the state, is likely to be in Kolkata in early June. He will be asked for to render the government certain parameters for the advance of Muslims.

Ms. Mamata Banerjee will finalize the decision by the third week of June. If everything goes rightly Dr Osman Ghani will be the next chairman of Minorities Commission to execute the scheme.

What’s for Hindus then? How can you be so communal? Don’t you know is a secular state? 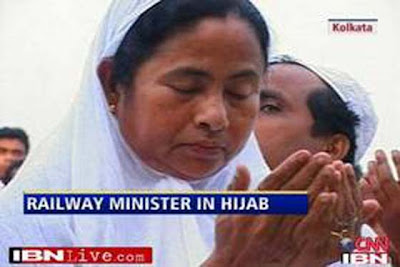