Can a simple sport of playing marbles turn into a violent feud ever? Many readers may become skeptic at this in the beginning but the bitter truth must be introspected as well. These types of chronicles are not rare in the rural sphere of the Indian state of West Bengal and are becoming more and more common with the passing of each day. Fresh turmoil and subsequent assaults on Hindu Samhati workers in areas belonging to areas under P.S.(police station) Basanti (CharaVidya, No.6) and P.S. Jibantala denote the same.

The incident took place in the Village Soakhali under P.S. Jibantala (North 24 Paraganas), around 12.30 pm, on 18 April, 2011, and had its beginning concerning a scuffle between Hindu and Muslim boys playing marbles. And to save the situation from deteriorating further, workers of Hindu Samhati stepped in. But little they did know of the consequence of the same. Making use of the fiery situation, Mohammed Hossain Gayen (son of Mohd. Nachim Gayen) (as part of conspiracy hatched already) along with almost 200 Muslim youths, equipped with deadly weapons, attacked Chiranjit Mondal, well-known Hindu Samhati activist in the vicinity, and battered him extremely. Later the assailants struck him on his forehead.

Chiranjit was admitted to Basanti Hospital at the outset but as advised by P.S. Basanti, he was later admitted to Canning sub-division Hospital.However Chiranjit Mondal is an inhabitant of P.S. Basanti but the incident occurred in an area under P.S. Jibantala.

Well, he was not the only one who was beaten up so savagely. Others were Jayanta Sardar, Amar Biswas, Ratan Mondal and Pratap Dolui and following the incident when Amar Biswas along with others went to P.S. Basanti to lodge a complaint against the Muslim thugs, they underwent an unusual situation. The complaint was not registered and they were asked to stay in the police station. As per police, an FIR had already been lodged against them in P.S. Jibantala. Muslims had filed an FIR against 12 Hindus. And as a result, Arun and Amar (had gone to P.S. Basanti) were arrested and produced later on in the court.

More striking developments are yet to come. A large police contingent led by SDPO Chandan Kanti Neogy started patrolling the entire area (same day) and warning Hindus, having no role in particular, using abusive languages. Only Hindu households were searched thoroughly. As part of the latest development, complaint of Hindus (against Hossain Gayen and his cohorts) has already been referred to P.S. Jibantala by P.S. Basanti but the FIR number is yet to come.

You may be amazed to know this. Parents of injured Hindu boys went to meet SDPO today itself but they were treated badly there.

All these have made Hindus living here for centuries extremely scared. 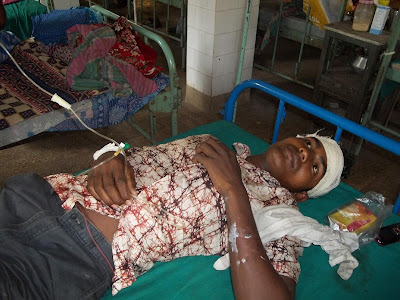