On November 20, 2011, Hindu Samhati remained witness to a major success in Dhamua, P.S. Magrahat, District: 24 Paraganas (South). A meeting was organized on the ground of Maitree Sangha and without doubt, the mammoth gathering proved how much the Hindu populace in the environs is hankering for a strong Hindu leadership.

Nevertheless, this meeting had perceived several other developments too on its part. As usual, police and local administration refused to let Hindu Samhati carry out the meeting and here also, the pretext was quite common. It was the preservation of communal harmony; perhaps administration there remains worried round the clock owing to bloody tensions in the recent past. But here also the administration suffered a defeat; the defiant posture of Sri Tapan Ghosh, president of Hindu Samhati, was too hard for them to withstand. The permission to have the meeting was finally provided.

To exhibit strength of Hindu Samhati in the neighborhood, an impressive procession, joined by hundreds of people, was taken out. Even if the keynote address was given by Sri Tapan Ghosh, several other speakers also spoke highlighting the reigning situation for Hindus, humungous betrayal of all parties, cutting across political lines, to them and the tasks lying ahead to save dignity and retain the Hindu Dharma in this part of India on the whole. They included Amaresh Mukherjee, Advocate Tapan Biswas, Baridbaran Guha, Pratap Hazra, Ratan Sardar.

On the same day, in the evening, another meeting took place at village Sasati, close to Ramnagar, P.S. Baruipur. This place is also new and the meeting, there too, became a good success thanks to the enthusiasm of local Hindus, realizing the fast changing reality amalgamated with rising Islamic communalism. 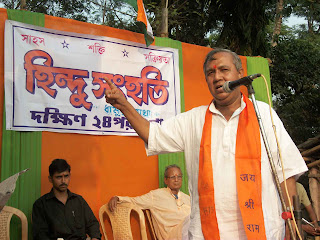 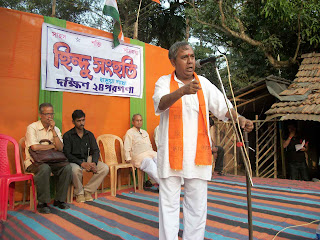 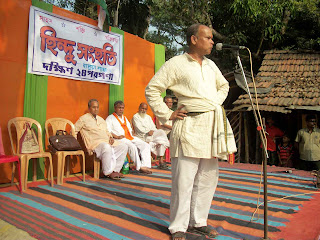 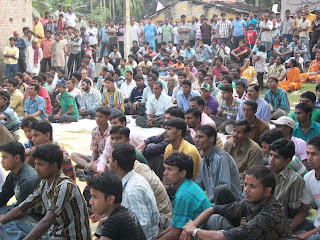