Glimpses of mosques in Kolkata

Kolkata, grand capital of the Indian state of , without a shred of doubt, happens to be a bastion of Muslims as well and evidences of this can be found in every nook of the metropolis. It is not known when and how the Muslim presence commenced in Kolkata but surely Pathan, Mughal or simply Islamic invasions played a great role in this regard.

In accordance with latest statistics, no less than 450 mosques in the city fortify the Islamic confidence and its density is known to be highest in the central district of the urban center. Muslim density, as usual, is highest in this part of the city. Now let’s pay attention to the mosques in particular. Even if there are some noted ones, most laudable ones among these include Nakhoda Masjid, Tipu Sultan Masjid, Rajabazar Barri Masjid, Ahl-e-Hadees Masjid. Nakhoda Masjid was built in the year 1926 and is found to lead the Muslim community of city in almost all religious aspects.

Others include Jumma Masjid, Masjid-e-Mohamadi in the midst of Park Circus and Lal Masjid in Colootolla. There is also Karbala Masjid in Metiaburuz, known for conforming to Shiah beliefs. Others are known for following the Sunni way of practice. Rajabazar Barri Masjid has already been talked of; its environs contain 11 mosques in total as well. Among them Tablighi Jamaat (Deobandi) deals with the affairs of 9 Masjid or mosques. The remaining two are managed by Sunni Barelwi faction.

There is another significant aspect to all these. The last mosque in Kolkata, as per records, was built in the central district of the city in 1942. And the majority of all was built between 1910 and 1940 by the pre-partition Muslim population.

Here is a few more information of Nakhoda Masjid. The prayer hall of the mosque has the capability to have 10,000 persons in unison. Three domes and two minarets of 151 ft. height glamorize the mosque. An additional 25 smaller minarets ranging between 100 feet to 117 feet high also make an impact on people. What is more, gateway of the mosque happens to be substitute of Buland Darwaza at Fatehpur Sikri.

Without doubt, all these are good and manifest Islamic artistic extravaganza and also architectural excellence. But it would have certainly been better if all ended here and with religious rituals only. A good number of accusations of these mosques do foment at times. Time and again there have been allegations that the majority of mosques in Kolkata are better arsenals than religious shrines.

Whether this is true or not, time will reveal. 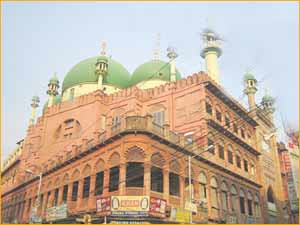 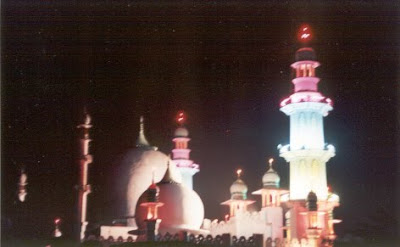