Tapan Ghosh’s clarion call of need of sacrifices makes Hindus enlivened
Eve of April 20, 2012 was like the evening of any other casual day in the realm of Tangra Colony, Banagon, P.S. Bamgaon, District: 24 Paraganas (South), but what turned out to be in the end proved to be something beyond the expectation of people, especially Hindus, living there. A campaign indeed went on of the meeting of Hindu Samhati (on that very day) in the last few days and apart from the endorsement of a very few people, no wider support was visible. But at long last all reluctant Hindus were found to seat in the vast field right before the podium of HS and listen to the fiery speeches of speakers of Hindu Samhati and above all of Sri Tapan Ghosh, president, Hindu Samhati keenly.
What made them so interested?  What an assortment of speakers of Hindu Samhati like Sri Abhijit Das, Sri Pradip Das, Sri Ajit Adhikary were referring to was not any petty issue but the age-old grievances of Hindus that have never been listened to, forget of taking those into consideration. Whether they’re the days of East Pakistan or existing Bangladesh or even the modern India, anguishes of Hindus do refuse to end. And whenever there is any legitimate demand of Hindus, political parties, irrespective of political inclinations, terming it as parochial and hence, hindrance to the nation’s progress make all efforts to kill it.
Hindu Samhati, Hindus know it very well, does detest to compromise its ideal of struggling for Hindu causes and all these joined with inspiring summons of Hindu Samhati leaders to Hindus to join the Hindu freedom struggle made the convention a sensational success.
But what surpassed all was the fiery speech of Sri Tapan Ghosh. Sri Ghosh started the speech through terming the notion of secularism as a national disease leading to a great endorsement from Hindus, acquainted with the same through daily experiences, present there.  He made it clear that the saga of secularism in India has been doctored and the present state of affairs is such that it doesn’t have any distant relation with the original definition even.
The most pious job of secularism in India is to render all and best opportunities to Muslims depriving others and in its failure, the chronicle loses both its sanctity and authenticity. Such an exposition happens to be the Imam-special package declared by the Bengal government of late that (in every capacity) happens to be a deliberate affront to the notion of national integration. When on earth a secular country like India, to conform to basics of secularism as enshrined in the Constitution of India, must not interfere into any distinctive religious affair, concessions to Muslims has become the greatest obligation of the State. Who is communal then? Is it the political system or Hindus asking reasons behind these?
Sri Ghosh went on analyzing the fallout of all these. As per him, owing to the existing mindset no disproportionate assets of Muslims are ever questioned – even if it’s known to all that fake currency in India is ruining the whole nation more and more and foremost trade route behind all these happens to be Kaliachak in Malda, Muslim-dominated district in Bengal. For that reason, task of Hindus is to comprehend the reality and act accordingly. Gone are the days when Hindus used to be reliant on principles of humanism, benevolence and fair treatment to all and ill-treatment to none. The reality is that all such noble thoughts of Hindus have been misused and through Islamic persecutions and various forms of treasons, Hindus have been maimed gravely.
If Hindus can’t react now, they will become extinct in the pages of history before long.
And if Hindus want to remain with dignity and abide by its age-old religious beliefs, they have got to go through the pages of Mahabharata, Ramayana and Bhagavad-Gita to find out the real meaning of struggle and how one can become victorious.
Hindus have to shed their blood to remain independent – this clarion call of Sri Ghosh led to a battle-cry within Hindus that might have unnerved Islamists in the vicinity and across the border as well. 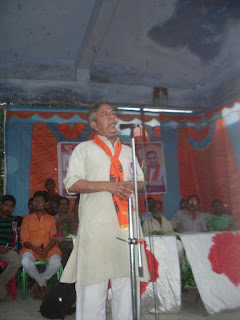 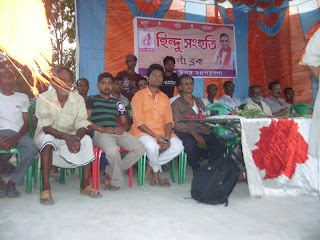 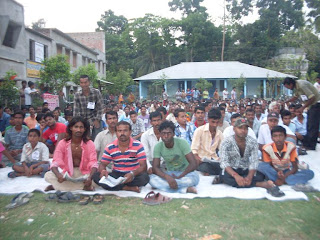