Hindus in Bengal, however gradual it is, are ascertaining the cruelest yet bare fact that without struggle they can’t even exist, let alone any material or spiritual development, in any environment shared by Islamists as well. And the best depiction of this understanding happens to be the village: Dakshin Bele, P.S. Joynagar, District: 24 Paraganas (South).

The entire village along with its vicinity remains witness to a steady conflict against Islamists and how Hindus are fighting desperately here to retain own basis along with that of their kith and kin. Nonetheless, in this struggle, true to form, Hindus are all alone as political parties are vying to prove themselves as ideal seculars through supporting Islamists and their each anti-Hindu struggle in every capacity.

In the village, a Hindu individual (known for inclination and hard work to CPIM) sold an agricultural land worth 1 acre to a Muslim individual. Islamists, at the moment, are leaving no stone unturned to have the same land and their sole aim, it’s needles to say, is to harass Hindus and grab Hindu lands in future, counting on the same tract.

Hindus, highly experienced of all these nefarious designs, are waging a desperate struggle to foil the same. A civil suit in court was commenced by them. When Islamists found it difficult to have the same land owing to legal compulsions, they got furious and tried to harm Hindus physically. But Hindus, instead of giving in to them, have been resisting each and every assault valiantly.

On June 23, 2012 such a direct conflict took place but to the astonishment of Islamists, Hindu youths from other villages joined Hindu warriors of Dakshin Bele. Well, strong determination showed its true colors and eventually, for this time, Hindus defeated Islamists who had no other option other than taking refuge in their own residences. Police, best cohort of Bengal’s choicest secularists (Islamists), appeared ultimately to rein in the worsening situation.

Mr. Tapan Ghosh, president – Hindu Samhati, went to the village on June 24, 2012 and met the villagers. 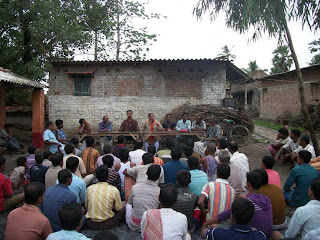 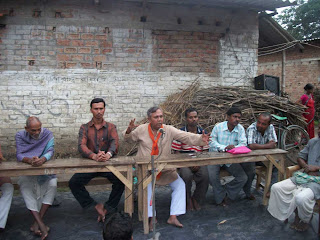 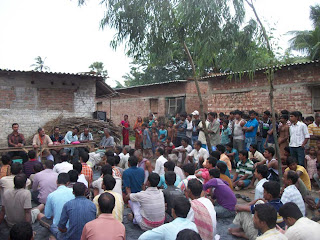 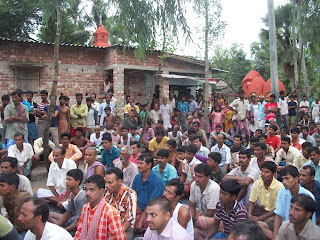