Unlawful Bangladeshi Muslims led the onslaught
The cudgel of responsibility to persecute Hindus in the Indian state of Bengal is not with the indigenous Islamists (only) any more; Bangladeshi Muslims (entering India sneakily and successful to have political support too), in throngs, are partaking in the same job these days and the harrowing incident in village: Madhyakolra, P.S. Domjur, District: Howrah brings this perilous reality forth. The incident took place on March 4, 2012 and the Hindu village is yet to recover from that trauma.  People of Dakshinkolra, adjoining village, dominated by unlawful Bangladeshi Muslims in particular, led the onslaught and the subsequent looting.
The trouble erupted at 10 am on the fateful day owing to the bid of a few Islamists to fill up a pond (for a real estate project) in the Hindu village and fervent protests of Hindus against the same outright. These Islamists were Mohsin Mufti, Sheikh Khokon Dewan, Atiyar Mallik and Nurududdin Sardar. When on earth they were prevented from going on with the same project, the four Islamists went back to their own bastions and soon no less than 600 Islamists, carrying lethal weapons and under the auspices of (unlawful) Bangladeshi Muslims, pounced on unarmed Hindus. Not the Hindu village was vandalized (completely) only, Hindu women were also molested, manhandled and thrashed in large numbers.
Kolra Maitree Sangha, local club known for its welfare works in the vicinity, was robbed (at first) and  (then) destroyed wantonly. Along with cash worth Rs. 25, 000 , several other belongings of the club were simply plundered. Members (Hindu youths) of the club were also persecuted mercilessly. All these prove that the attack was set before and Islamists were waiting for the opportune moment only.
What was the police and administration doing then? This question is fairly obvious as the problem is not new.
It is worthwhile to mention (in this context), Hindus, apprehending such dangers, submitted a letter to the Dolra No. 2 village Panchayat, Domjur, Howrah on February 29, 2012. The Panchayat and administration, through the letter, was requested earnestly to call the aforementioned real estate project (illicit in every sense of the term) of Mohsin Mufti a halt. And this was done since the fierce quarrel between Hindus and Muslims on February 25, 2012 regarding the same matter, had every sign of a sinister development.
Was the administration in a deep slumber? Perhaps not; the latter developments fail to support any such notion. Here are the reasons behind the same.
An FIR , as regards the  attacks on Hindus, was lodged at P.S. Domjur and it did name a few notorious Islamists in the neighborhood (witnessed to participate in the attack). They were Mohsin Mufti, Sheikh Khokon Dewan, Atiyar Mallik, Nurududdin Sardar, Ansar Mollah, Nur Alam, Sabir Mollah, Firoz Mollah, Alfaz Dewan, Minaz Dewan, Mofijul Sheikh. Sections 154, 326, 307 and 379 were imposed on them.
But, strange enough, in spite of presence of non-bailable sections each and every Islamist has been bailed out and is roaming freely. What went wrong then? The police have got to answer.
There is another question as well. How could unlawful Bangladeshi Muslims settle there? In accordance with villagers, this colony was set up five years ago and has been expanding fast.
The entire incident, as per villagers of Madhyakolra, is a part of Islamic expansion. 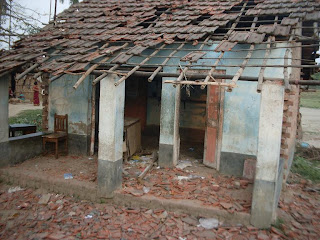 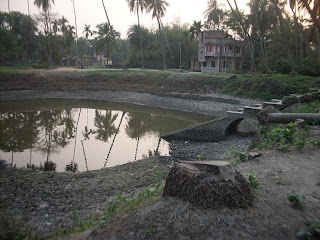 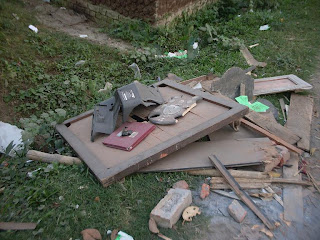 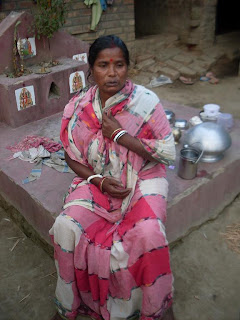 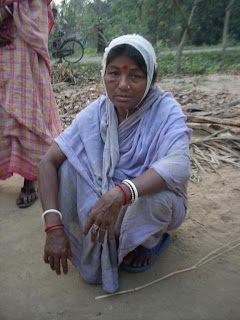 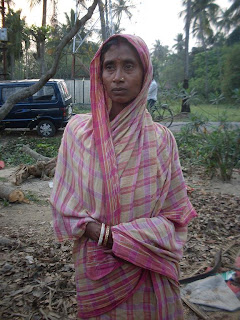 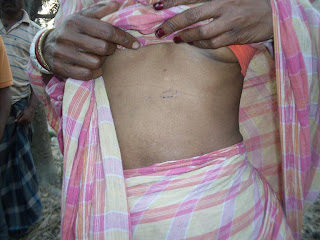 (Shyamali Bag showing her injuries)
Posted by Unknown at 2:55 PM