It was the morning of December 18, 2011, a chill day, when a bizarre incident was perceived within the premises of Diamond Harbor Sub-divisional Court; a mosque was being constructed. The day was also a Sunday and hence, the absence of workforce in the environs was duly exploited. It has also been learnt, that no official permission has been taken to carry on the task of transforming an old, miniature Muslim prayer room to a comparatively larger one. What is more incredible, the entire construction is taking place within 20 ft. of the court lockup jeopardizing the security without doubt.
What was the first reaction of people in the environs? All watched but none dared to raise a single protest; there are few reasons behind this too. Admittedly, the entire construction has been going on under the auspices of Roich Mollah, who had many criminal cases in his name, now a businessman. His nexus with the local politicians and administration has made him influential and he allegedly uses this influence to do this utterly illegal act, i.e., expansion of the mosque in court premises in the sub divisional town of Diamond Harbour.
Nevertheless, as soon as the information of the said illegal incident reached the local Hindu Samhati office, SP (24 Paraganas – South) and were informed without any delay.
Alas, the construction is in full swing at this point in time.
Here is the simple lesson (derived from the said incident): Muslims can do no wrong in the eyes of administration in West Bengal. 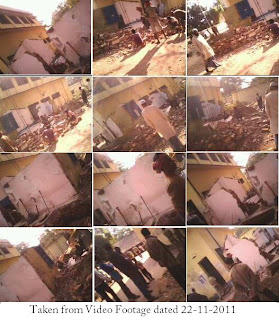 (picture of the video footage)
Posted by Unknown at 11:38 AM